From post-processing (recorders) to real-time
monitoring (buoys) and multiparameter
assessments (stations), we provide a wide range of
solutions for marine biologists and PAM operators.

Take a closer look at our videos and pictures below. You can also keep up to speed with our latest innovations on our social media channels! 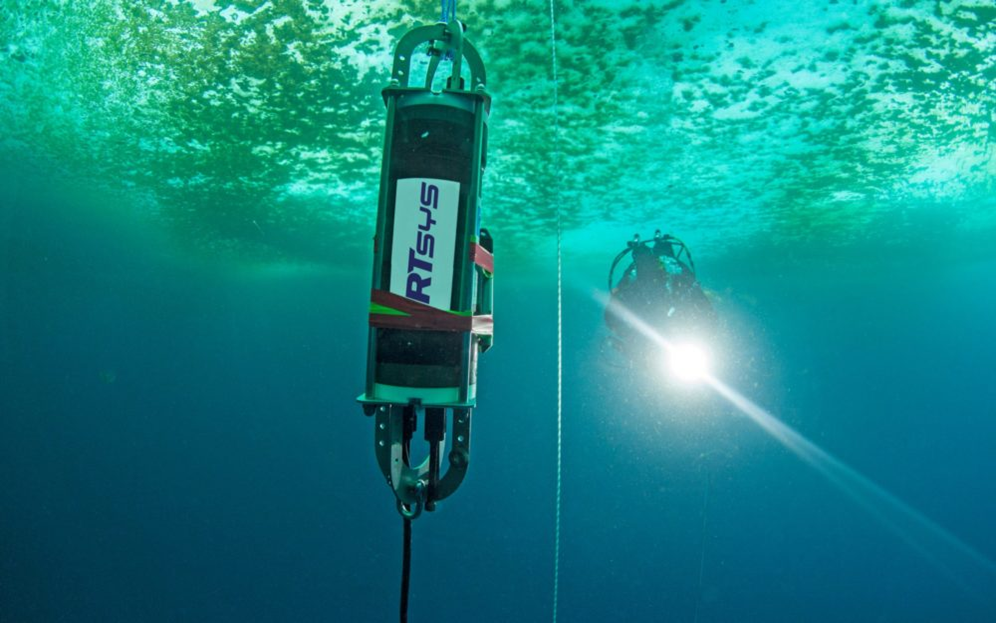 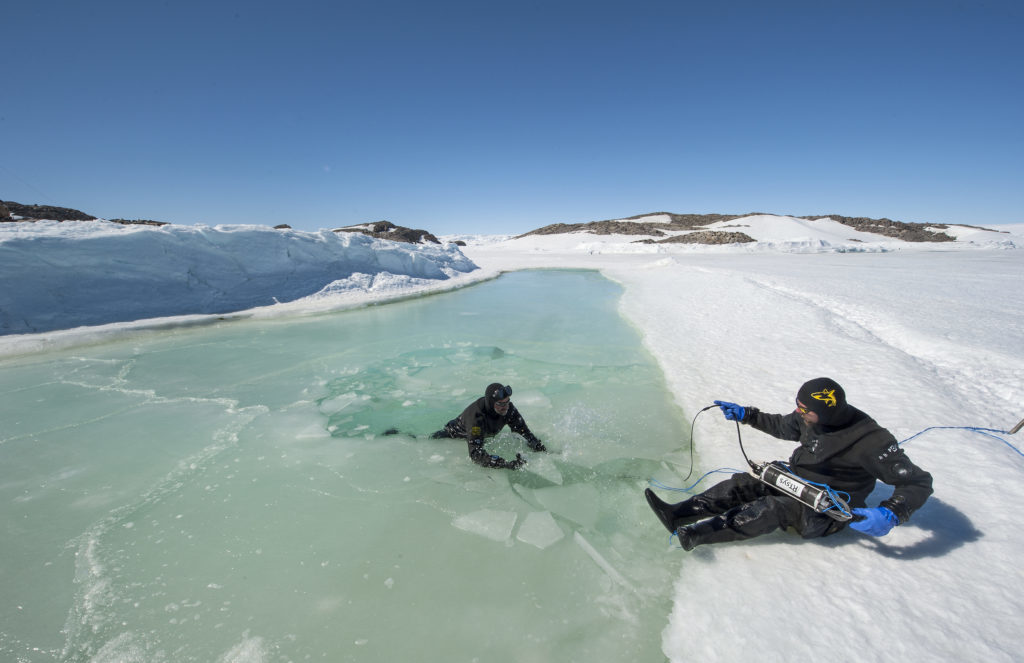 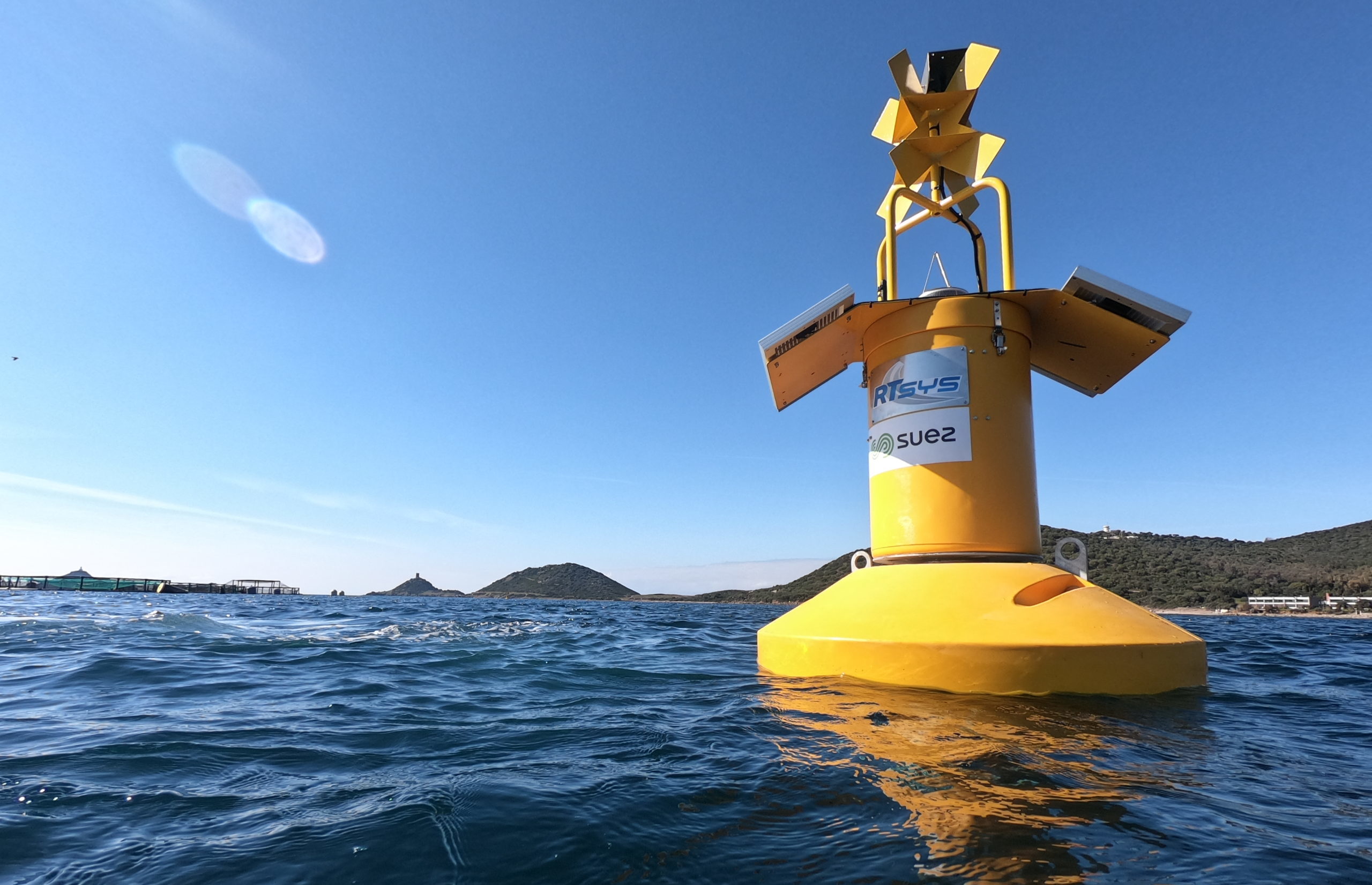 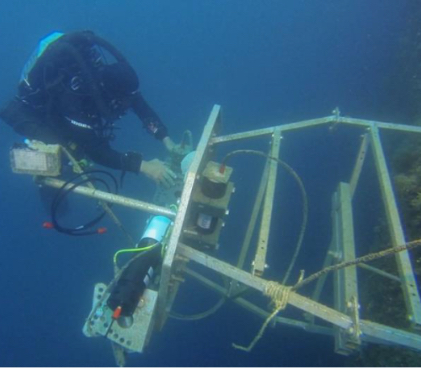 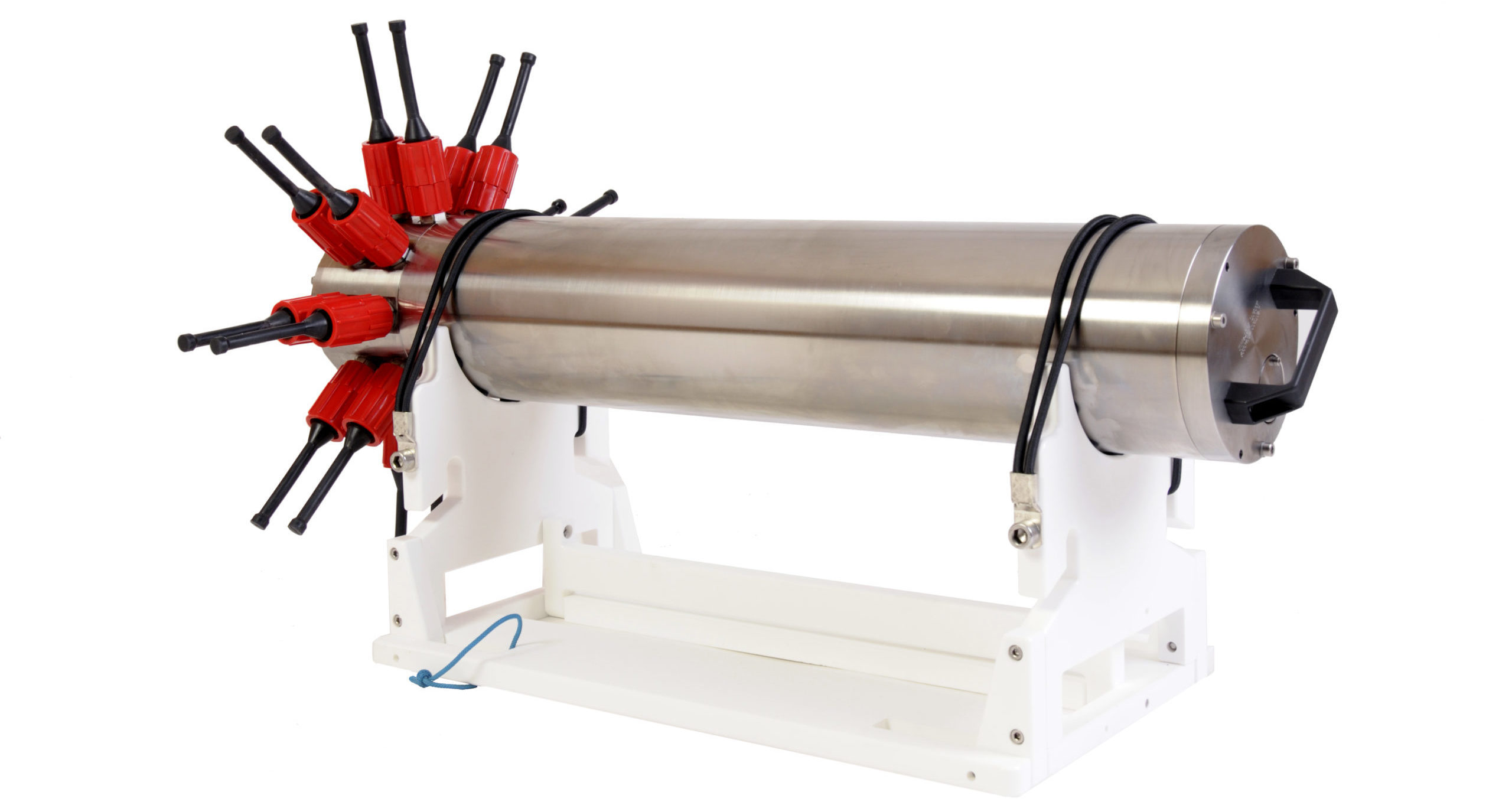 Characterization of underwater operational sound of a tidal stream turbine 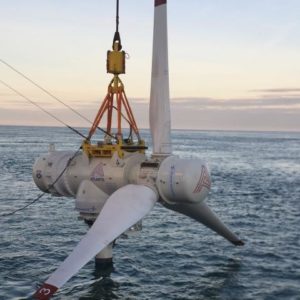 underwater sound emitted during the operation of the Atlantis AR1500 turbine, a 1.5 MW three bladed horizontal axis tidal-stream turbine, was measured in the Pentland Firth, Scotland. Most sound was concentrated in the lower frequencies, ranging from 50 to 1000 Hz. Within 20 m of the turbine, third-octave band sound pressure levels were elevated by up to 40 dB relative to ambient conditions. In comparison, ambient noise at these frequencies fluctuated by about 5–10 dB between different tidal states. At the maximum recording distance of 2300 m from the turbine, median sound pressure levels when the turbine was operational were still over 5 dB higher than ambient noise levels alone. A higher frequency, tonal signal was observed at 20,000 Hz. This signal component appeared at a constant level whenever the turbine was operational and did not change with turbine rotation rate. It is most likely produced by the turbine’s generator. This study highlights the importance of empirical measurements of turbine underwater sound. It illustrates the utility and challenges of using drifting hydrophone systems to spatially map operational turbine signal levels with reduced flow noise artefacts when recording in high flow environments. 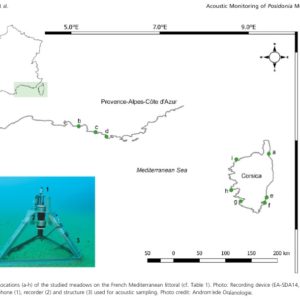 In the Mediterranean Sea, the seagrass Posidonia oceanica plays a key ecological role, and is protected by a range of legislation. Standard Posidonia monitoring programms generally focus on the plant at different spatial and short temporal
scales, without considering the organisms dependent on the ecosystem.Passive acoustic monitoring (PAM) has a high potential to non-intrusively monitor biological activities and biodiversity at high temporal resolution, and to assess ecosystem health. This is particularly relevant considering that Posidonia meadows host numerous sound-producing ﬁsh species. In this study, bottom-moored hydrophones were deployed in nine Western Mediterranean meadows covering a distance of more than 200 km to identify acoustic features potentially relevant to monitor this critical habitat. Among eight identiﬁed ﬁsh sound categories, we found a single type of sound (that we will refer to as /kwa/) dominating the soundscape of Posidonia meadows over a time span of 7 months. Compared to other low-frequency sounds, the /kwa/ presented unique characteristics that suggest it is produced by a ﬁsh via fast contracting muscles.
The /kwa/ was the only sound detectable under anthropogenic noise conditions, and little affected by it. Cluster analyses performed on 13 acoustic features revealed a high degree of call diversity. /Kwa/ diversity, combined with its large-scale (all meadows), long-term (7 months) occurrence and low noise interference, make the /kwa/ a promising candidate for PAM of Posidonia meadows. Furthermore, variability in acoustic features suggests a central role of the /kwa/ in communication. Overall, this work sets the basis for establishing the relevance of the /kwa/ in monitoring P. oceanica meadows and developing PAM techniques for this critical habitat. 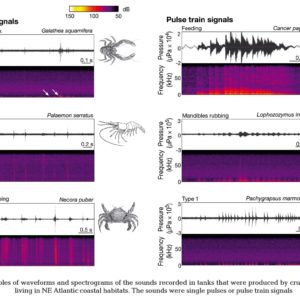 Although many studies have investigated the benthic environment of temperatemarine waters, little is known about the acoustic behaviour of the organisms in these habitats,particularly crustaceans. This study focused on the acoustic behaviour of large crustaceans inNE Atlantic coastal regions. A total of 11 crustacean species were recorded in tank-basedexperiments to identify sound-producing species and the behaviours associated with theirsounds as well as to quantitatively characterise and compare the sounds. A total of 34 soundswere associated with behaviours such as moving, feeding, mandible rubbing, swimming, spe-cies-specific behaviour and other unidentified behaviours. The sounds included single pulseand pulse train signals that were distributed across a peak frequency spectrum of 3 to 45 kHzwith received levels between 93 and 142 dB re 1 μPa (peak to peak). The resultsdemonstrated that Brachyura had the most diverse sound types. Using a combination of sev-eral acoustic features, 24% of the recorded sounds appeared to have a high potential to be differentiated in field recordings: the feeding sound of Cancer pagurus, Carcinus maenas,Necora puberand Pachygrapsus marmoratus; the species-specific sound of C. pagurusandGalathea squamifera; and the pulse train sound associated with unidentified behaviours ofLophozozymus incisusand N. puber. These findings extend the existing crustacean acousticlibrary in marine ecosystems and contribute to our understanding of in situacousticrecordings in temperate regions. 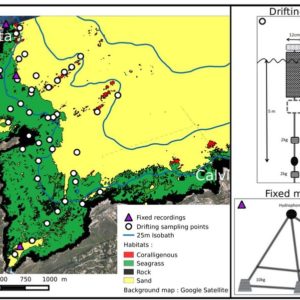 Coastal soundscapes are dominated by broadband transient sounds primarily emitted by benthic invertebrates. These sounds are characterized by a very large dynamic of amplitude. The loudest ones propagate further and interfere with the detectability of benthic sounds by invading other more distant habitats. Acoustic diversity assessment is therefore biased when applying acoustic indices related to the signal’s power. Here, we propose new acoustic indices (IDSS: Indices of the Diversity of Spectral Shape) capable of extracting the diversity of the Benthic Invertebrate Biophony (BIB) despite the interference of loud and abundant sounds. A passive acoustic ecological survey was conducted in a shallow water Mediterranean bay with a small-scale mosaic of biocenosis. Sound pressure level and spectrum of the BIB revealed that the rocky fringe has the most powerful biophony propagating up to 3680m, thus “invading” other habitats. These power-based indices failed in depicting BIB diversity. The IDSS allowed to discriminate the BIB diversity despite the interfering rocky fringe biophony and including low-power sounds not depicted by traditional power-based methods. Four main categories of Benthic Invertebrates Sounds (BIS) spectra were found. Two categories (high-power, peak frequencies ~3kHz, 4kHz) were mainly linked to the rocky fringe. Their contribution to the diversity (56%) decreased with increasing distance to the fringe where low-power BIS (peak frequencies above 15kHz) predominantly contributed to the BIB (42%) and may be specific to coralligenous reefs. The IDSS enable a better characterization and quantification of the BIB diversity and of the soundscape structure with a fine spatial resolution (~200m). 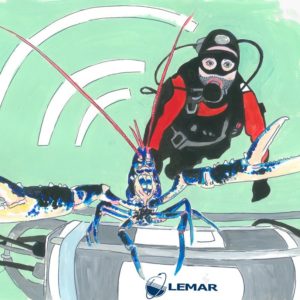 Experiments in marine behavioural ecology rely heavily on observations made in tanks. However, when studying acoustic behaviours of marine animals in confined volumes, the effects of reverberation must be characterized, something that has been overlooked in parts of the marine ecology literature.
In this study, we characterized reverberation in tanks using an artificial sound source and examined the implications for bioacoustic studies using sounds emitted by the European lobster Homarus gammarus during feeding and in response to stress. Broadband and transient sounds commonly produced by crustaceans were severely impacted by reverberation such that their spectral characteristics and pulse width durations could not be assessed. In contrast, low-frequency
sounds could be characterized in tanks, but not their source level. Based on these observations,
we describe a simple methodology to identify which sound characteristics can be measured in tanks.
When feeding, the lobsters produced broadband and transient sounds called ‘rattles’, similar to sounds reported for tropical spiny lobsters Palinurus longipes and P. argus. When stressed, H. gammarus vibrated its carapace, producing a low-frequency sound analogous to the ‘buzzing’ sound of the American lobster H. americanus. The potential role of species-specific sound is discussed; however, although our observations represent the first bioacoustic characterization of H. gammarus, additional behavioural studies are necessary to understand their ecological meaning.

As water levels are continuously rising because of global warming, harbor cities facing growing urbanization have no choice but to extend onto the seashore.

In this regard, RTSYS helps construction and dredging companies to adopt a multiparameter framework using the SYSENSE seabed station, allowing real-time monitoring and remote control of various data, such as acoustics, salinity, water depth and turbidity. All collected parameters can be remotely displayed in real-time through a dedicated website.

90% of global goods are carried by maritime freight and the volumes transported are constantly growing as new routes appear. Consequently ships and cargos need to be increasingly efficient in terms of speed, size and energy consumption. Radiated noise generated by ships  must also meet rules and regulations as awareness of anthropogenic noise heightens.

Based on this knowledge, we help shipyards design better ships using Passive Acoustic Monitoring (PAM) either with real-time or post-processing methods. Meanwhile, ships in operation can use underwater acoustics to detect any defects or mechanical failures.

Due to the rise of anthropogenic noise, marine biologists and PAM operators need to keep a constant watch, as underwater sound may affect marine species’ habitats.

Additionally, Protected Species Observers (PSO) and Marine Mammal Observers (MMO) are increasingly learning the importance of underwater acoustics in their understanding of marine wildlife. Species that science thought were soundless until a few years ago appear to express numerous acoustic signals that tell more than the eyes can see.

In addition to biological and anthropogenic sounds, geological sounds (earthquakes, thermal sources …) can be observed helping for a better understanding of oceans.

As the main bulwark against global warming, their chemicophysical properties need to be closely monitored, which can be easily implemented using AUVs, equipped with various payloads for long autonomous surveys.

Paired with a buoy, RT-Live Monitor software helps to mitigate noise levels in real-time and ensure compliance with current rules and regulations regarding underwater sound.

In a context of increasing worldwide tensions RTSYS brings its expertise in Anti-Submarine Warfare (ASW) and Mine Counter-Measures (MCM) to Navies in order to make oceans a safer place.

Our knowledge in underwater acoustics and robotics allow Navies to recreate complete MCM and ASW environments. MCM operations are built on a complete range of divers, AUVs and PRBs (Positioning and Relay Beacons) enhancing both navigation and detection capabilities. ASW capabilities are highlighted with a focus on the improvement of training capacities and acoustic systems.